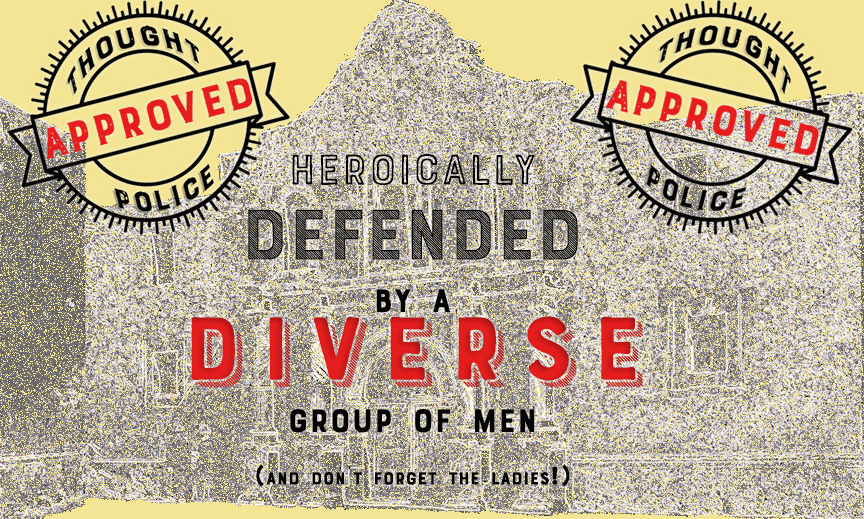 A Dumb Solution to a Dumber Problem

I wrote last week about the proposed efforts to remove the word "heroic" from Texas history curriculum to describe the Alamo defenders. Many of you reached out to Board of Education reps and some to the Work Group members who suggested the changes in the first place. You shared your letters with me and reading them was a profound experience. Texans from all regions, ages and walks of life - from DRT members to newly adopted Texans - homemakers, physicians, Texas history teachers - all treated the Alamo defenders as family and spoke up. Some of those letters moved me to tears. I'm grateful to all of you for your heart and your concern.

So what's the verdict?

We were heard and we did good! The Board chair had to put her email on an auto-responder because of the flood of emails.

The good news: After the public hearing on September 11, the Board held a PRELIMINARY vote and voted unanimously to keep the Travis letter and the word "heroic." Newspaper and online media headlines declared that "heroic" will stay. Even Senator Cruz and Gov. Abbott applauded the final decision. But it isn't the final decision. The final vote is not until November, and we need to remain vigilant about this until the final vote takes place. It ain't over til it's over.

The bad news: In order to cram some political correctness in, any which way, it was suggested that the Alamo defenders be described thusly: "...the heroism of the diverse defenders who gave their lives there." This entire streamlining process was about removing extraneous junk from the curriculum, so much so that Travis' letter was almost lost. But now we can teach Alamo heroism, as long as it's diverse.

Why? Because it's 2018. God forbid we not check the white privilege of men who died 182 years ago in a garrison where Anglos outnumbered Tejanos 17 to 1. The defenders don't become magically more diverse if we add the pet word of postmodernists to the curriculum. We can't go back in time and morph David Crockett into Dave Cortez. It is what it is, and it wasn't particularly diverse.

If you've never heard of William Carney or Philip Bazaar, don't worry, you're not dumb. Of the 1,500 Congressional Medals of Honor given out for service in the Civil War, these two heroes were chosen for our curriculum some time ago. By the Board's standards, it's okay to call them heroes because they were "diversity hires," so to speak. Sgt. Carney was the first black man to receive the Medal. Bazaar was a Chilean immigrant who received the award for valor as a Union seaman.

The Alamo defenders were, essentially, too white to be heroic. I know, I know...this is not a popular sentiment to express publicly. Living in a time where everything is about race is exhausting. I didn't want this to be about race, but the evidence has stacked itself that way. In the coming days and weeks, I will tell you about what esteemed professors in Aggieland and at UT have to say about this.

In the meantime, please remember that this thing isn't over until November. A lot can change between now and then.

Come and Take It

You've probably heard the story of the Gonzales cannon and...

Texas History Trivia   Answers are at the Bottom of...

This page content is generated by GemPages.For more information, please...

This week's clippings are inspired by a famous quote.  ...

If you looked through our offerings of historic...

This week, in honor of the listmaker rumored to be...