You've probably heard the story of the Gonzales cannon and the Come and Take It flag, but many versions are second or third-hand and have been mythologized to some extent.

But Noah Smithwick, blacksmith, Indian trader, Texas Ranger, was actually on the scene and has left us a report:

"...we laid off our packs and hurried on to Gonzales, the initial point of attack, to help repel the Mexicans, whose only ostensible purpose proved to be the recovery of an old cannon which the citizens had borrowed from the garrison at San Antonio some time before to defend the place against Indians, and which was practically useless, having been spiked and the spike driven out, leaving a touch-hole the size of a man's thumb.

Its principal merit as a weapon of defense, therefore, lay in its presence and the noise it could make, the Indians being very much afraid of cannon. But it was the match that fired the mine, already primed and loaded.

Before we reached Gonzales the Mexican soldiers arrived on the opposite side of the river, which they did not attempt to cross, and made a formal demand for the cannon.

Useless as it was, the Texans not only refused to surrender it, but crossed over and put the Mexicans to flight. 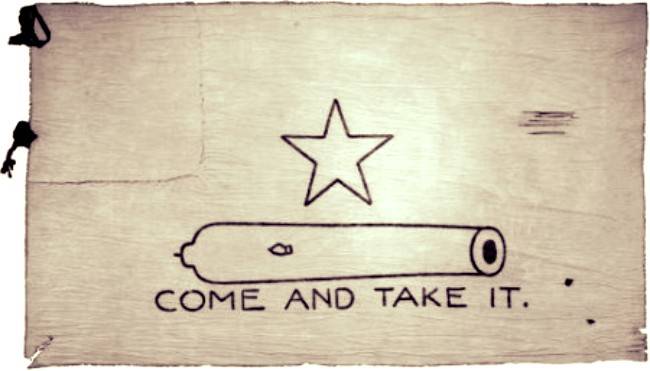 It was our Lexington, though a bloodless one, save that a member of the "awkward squad" took a header from his horse, thereby bringing his nasal appendage into such intimate association with Mother Earth as to draw forth a copious stream of the sanguinary fluid.

I can not remember that there was any distinct understanding as to the position we were to assume toward Mexico. Some were for independence; some for the constitution of 1824; and some for anything, just so it was a row. But we were all ready to fight.

Our plan was to rush on to San Antonio, capture the garrison before it could get reinforcements, and then - on to Mexico and dictate terms of peace in the capital of the Montezumas.

The Sowells had a blacksmith shop at Gonzales, and, being a gunsmith, I set to work to help put the arms in order. There was no coal, so some of the boys were set to burning charcoal.

We brushed the old cannon (an iron six-pounder), scoured it out, and mounted it on old wooden trucks - transverse sections of trees with holes in the centers, into which were inserted wooden axles - and christened it "the flying artillery," making merry over it as if it were some holiday sport we were planning for.

We had no ammunition for our "artillery," so we cut slugs of bar iron and hammered them into balls; ugly looking missiles they were I assure you, but destined to "innocuous desuetude," as I shall relate in due course.

We were going to do things in style, so we formed a company of lancers and converted all the old files about the place into lances, which we mounted on poles cut in the river bottom.

While some were busy with the arms and ammunition, others were devising a flag. I cannot say who designed it nor who executed the design, as that was not in my department, and history is silent on the subject.

Hubert Bancroft devotes some space to the origin of the Lone Star flag. Had he consulted me, I could have given him a pointer, for to my certain knowledge the first Lone Star flag used in the revolution was gotten up at Gonzales for Austin's army and consisted of a breadth of white cotton cloth about six feet long, in the center of which was painted in black a picture of the old cannon, above it a lone star and beneath it the words, "Come and take it," a challenge which was lost on the Mexicans.

It was not called the Lone Star, however, but the Old Cannon flag."

Update on the DIVERSE Alamo Defenders

A Night of Violence

This week, in honor of the listmaker rumored to be...

The following was written by Dr. David Fentress, a Texas surgeon...

If you looked through our offerings of historic...

This week's clippings are inspired by a famous quote.  ...
View All