The Last Soldiers of the Republic of Texas 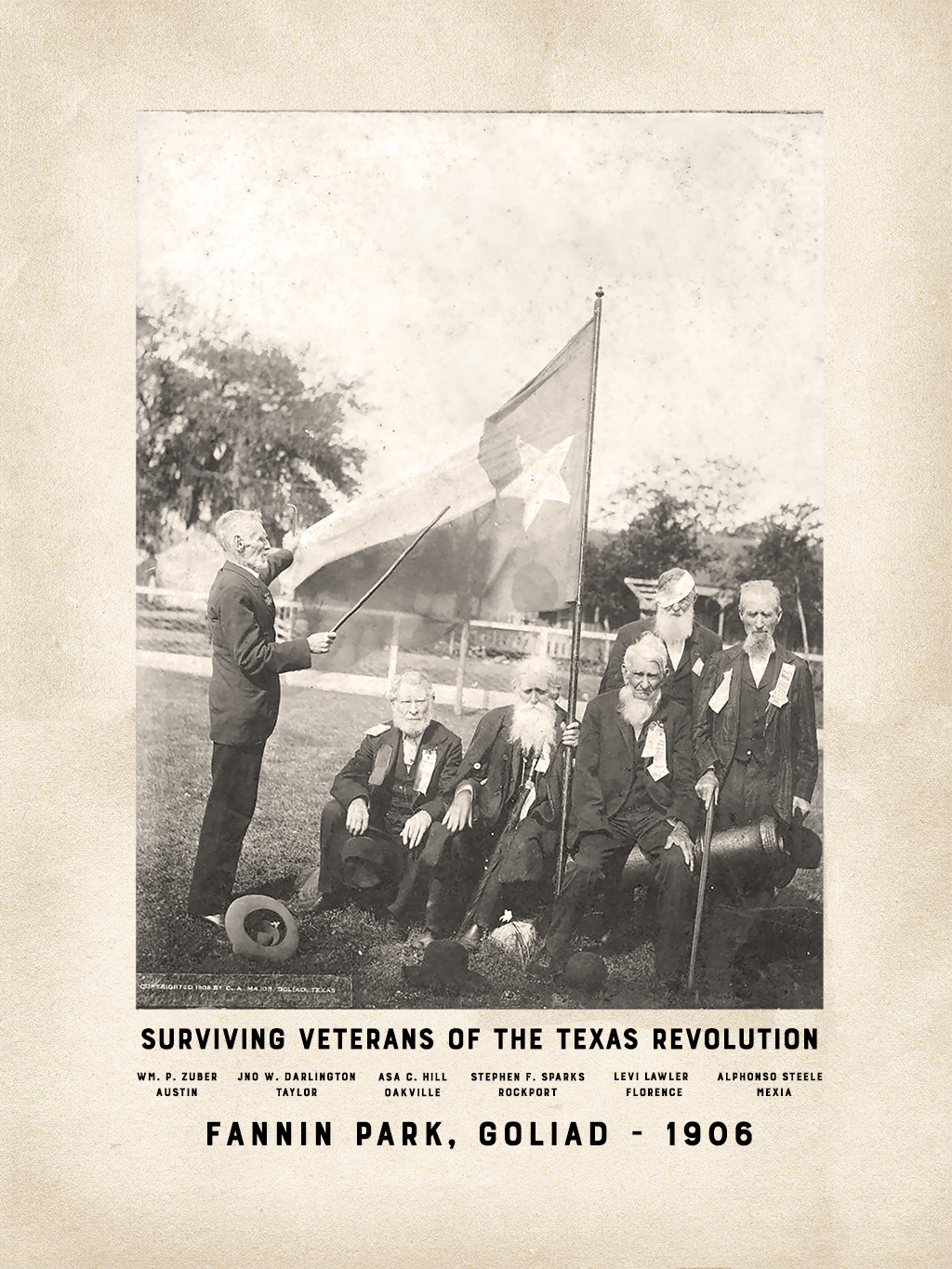 They Fought for Texas
You are looking at the last of their kind: men who risked all fighting for the Republic of Texas.

This 1906 photograph was taken at Fannin Park in Goliad in 1906. That was the last annual meeting of the Texas Veterans Association.

The cannon upon which they rest is known as Col. Fannin's Cannon. It was used at Coleto Creek by the men who were massacred under Santa Anna's order. The old cannon is still there today. You can go take your own picture with it.

Who are these six men?

William Physick Zuber (1820–1913) of Austin. He was in the rear guard at the Battle of San Jacinto. He later took part in the Sommervell Expedition. He also served in the Confederate cavalry, farmed and taught school in rural Grimes County. He was a charter member of the Texas State Historical Association.

John Washington Darlington (1821–1915) of Taylor. He fought in the Battle of Plum Creek, fought against Vasquez and Woll during the raids of 1842, helped build the first capitol building at Austin. He also ranched and served in a ranging company during the Civil War.

Asa Collinsworth Hill of Oakville (1826-1913) - He doesn't really belong with this group, as he didn't serve during the republic years, though his father and brothers did. Sam Houston took him to Washington as his personal secretary when he became senator in 1846. Hill commanded a spy company during the Mexican War. He was a Texas Ranger captain before the Civil War

Stephen Franklin Sparks of Rockport (1817-1908). He took part in the Siege of Bexar and fought at the Battle of San Jacinto.

Alphonso Steele of Mexia (1817-1911). He was the last surviving participant of the Battle of San Jacinto. While delegates met at Washington on the Brazos, Steele worked at the local hotel, grinding corn for their bread.

The Texas Veterans Association was an organization of those who performed military service in Texas prior to annexation. It held its first convention at Houston in 1873, with about seventy-five veterans present. The annual meetings always took place the week of April 21, San Jacinto Day.

The association dissolved the year after this photograph was taken, and its work was taken over by the Daughters of the Republic of Texas.

There are many books about early Texas veterans. Reading about their lives and exploits is a wonderful thing. There might even be portraits of them in those books, but this is something different.

Here we get to see them in the open air, real flesh and blood soldiers, now old men, taking in the passage of time, recalling all that they did, and remembering their brothers in arms.

The image was sold as a souvenir the year it was take and is now a rare and valuable item. It never comes to auction, and if one did, the auction estimate would be $5000 to $10,000.

We have reproduced it as a fine-art print. It is 18 by 24 inches so it will fit in a standard size frame without need for expensive custom framing.

49.95
Physical Details
This is a high quality fine-art print.

The paper is acid free, heavyweight fine-art paper with an elegant ever so lightly textured finish. This surface allows the inks to 'bite', reproducing the shading and tonality of the original map vividly, beautifully, and exactly.